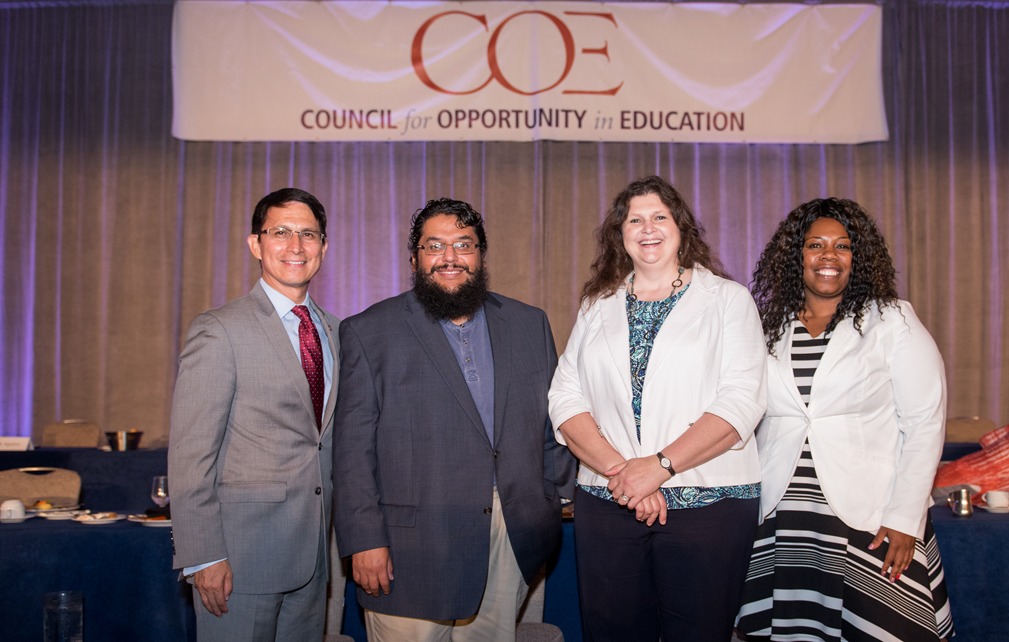 COE’s Annual Conference featured a panel of TRIO alumni discussing how faculty and administrators can create a more hospitable climate for underrepresented students on college campuses. Frank Sanchez, President of Rhode Island College, moderated the panel, which included Juan Zalapa, a research geneticist at the University of Wisconsin; Jennifer Dennis, vice provost and dean of the Graduate School at Oregon State University, and Carol Fischer, assistant professor of biology at Waldorf University. Their discussion is excerpted below.

Frank Sanchez: What are some of the best practices that you have seen in the area of inclusivity [on college campuses]?

Juan Zalapa: I have three things that I think of when I think of inclusivity: One is awareness—just to be able to know as a community, as a university, as a people—that these things are going on. Sometimes there is discrimination; there are people that don’t feel included. And with that awareness comes making a plan to start including everyone and appreciating each other’s differences and similarities, that we are more similar than different. Number two is creating a community, having students from different backgrounds, having faculty from different backgrounds. Number three is to have training. Many times we don’t even know we have a bias—I may have a bias and don’t even know it—but if I go to some training, maybe I can see that.

Jennifer Dennis: I have a brief answer this time: empowerment and value. And I think that as I look back as a faculty member at Purdue, it was empowering me to be myself which allowed me to reach out to different populations… You [also] have to have faculty that value what it is that you’re doing, and so they’re counting the publications, they’re counting the grants, they’re counting the number of graduate students, but if they don’t see the service as important and as a part of community building, then it will never work.

Carol Fischer: I’m learning about our role in this … At Waldorf University, we had a large meeting of everyone that was coming into our department: the new students. The day before classes started, we fed them supper, and we got them to talk about who they were and where they came from and got them to talking with each other, which also gave us an idea about who they were and how to reach out to them a little better. They all take a seminar, and part of that seminar is about microaggressions and inclusivity, which I think is fantastic.

Frank Sanchez: Low-income students, and students from underrepresented populations, as well as students with disabilities, may come to campus less prepared than their peers. How do faculty, particularly minority and non-minority administrators… recognize the talent of these students and how do they nurture [it]?

Jennifer Dennis: In Illinois, one of the things that they instilled in us, we had a separate orientation, and they told us that when we saw people of color—we spoke. That resonated with me …and so when I went to Purdue, and I saw these students and they would go past me—I would actually harass them and I’d introduce myself and say, ‘Hi, I’m Dr. Dennis, and who are you?’ and sometimes they wouldn’t give you eye contact, they wouldn’t give you a nod—and so I built network that way…I talked about giving people information, that was what we’re there to do and then they make their own choices. One faculty member in my own department said, ‘Well, you just want to let anyone into graduate school’ and I thought, well there really is nothing wrong with that!—but it’s now what I want to do. I want to give people the information and give them opportunity to decide whether they want to meet that bar. But if they don’t have language, if they can’t talk, if they don’t know what an assistantship is, they don’t know the difference between a master’s and a Ph.D and what they should be doing—we’re putting everyone at a disadvantage.

Juan Zalapa: We already mentioned being asked to be a part of all these [faculty] committees, but I never mind, I really always enjoyed serving and just speaking about recruiting and helping minorities come along … the pipeline. For me it’s important that I’m there, that I’m represented and that I’m an advocate, so I never say no—to anything that has to with diversity and speaking and going out and putting myself out there. … I think there is extra pressure to do lots of things, but I embrace that. Number two, one thing that is a pressure for me, that has been a pressure… [is that] I don’t have a mentorship system anymore.

Carol Fischer: It’s very different from anything I’ve ever done. I’ve been there two weeks, and I’ve never been in any kind of position like that before. And I’m looking for a mentor because I wasn’t assigned one…. I went to the first faculty meeting, and I didn’t have a clue what anybody was talking about—because it was all stuff that they don’t talk about to students. I mean, no one talks about it outside of those doors, so it’s a steep learning curve, and it kind of almost feels like you’re fresh meat. There’s all kinds of stuff that needs to be done, and they want you to jump in and do it--and in the meantime you’re trying to put together classes…so there’s an awful lot of lectures, lesson plans, and tests and all the things you have to get ready.

Frank Sanchez: What advice would you give college access and success professionals about how to approach faculty members on their campuses for support for their students?

Jennifer Dennis: I’d say the quick answer is to find your early adopters and invite them to coffee and talk to them about what you do—I’m looking for you all on my campus and I’m looking for all of you now, please remember me, come talk to me. Send me an email, and tell me your students want to come to my organization—I’d be more than happy to talk to you. But go on, and invite them for coffee.

Carol Fischer: Ask, because we are more than willing. I came down this road because I want to help people who came from backgrounds like mine, and sometimes people don’t know that about you—you don’t know until you ask.

Or
If you have linked your account to one of the following social networks, please click on the relevant icon to log in
Not a member yet?
Join Now